When I moved to site last year, I watched my host mom spend a few weeks cooking and canning tomatoes, vegetable and jam for the winter season. Being a male, I was not supposed to be interested in cooking, let alone canning (you'll remember that it wasn't until January was I allowed to make potato soup for the family), and I had very little interest in the process. That said, I've had a lot of free time on my hands this past week as the office has been shut down to allow the Armenians some rest after completing 3 projects between the 2 of them over the summer.

So, I decided to do something in my kitchen since I've neglected it for far too long. And I decided I'd learn to can. I'll admit, I'd previously considered this after suffering without fruit last winter save mandarins, and had already purchased a can sealer and lids, but hadn't began to be serious until I suddenly found myself with 10 days off. So, I decided it was time. I, along with the two sitemates who have recently moved to Բերդ, went and purchased 20 kilos of tomatoes and 2 dozen jars. And so the inaugural week of canning began.

First things first: Canning is serious. Screw it up and you can end up with food spoilage and potentially botulism.  Before you look into canning, I'd seriously spend some time (Simply Canning - Canning Safety) doing some research. Invest in lemon juice; adding it to every can will help preserve the food, and the lower acidity will reduce the chances of spoilage. And don't take shortcuts. Clean and sterilize everything. 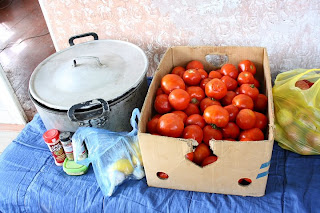 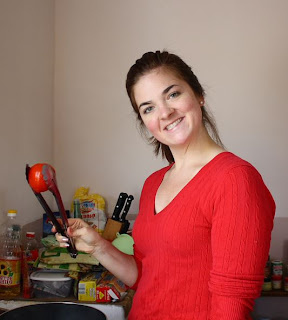 New sitemate Caroline was in charge of peeling the tomatoes. An easy way to do it is to bring a bowl of water to boil, and drop the tomato (with a small x cut in the peel) in for 30 seconds or so. Then immediately drop it in a bowl of cool (colder the better) water for about 10 seconds. The peel should all but fall off. 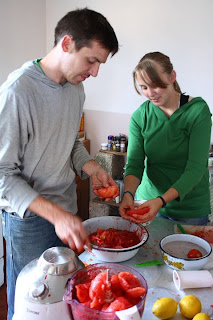 Here is Ashley (the other new sitemate) and I cutting open the tomatoes to remove seeds and fluids. 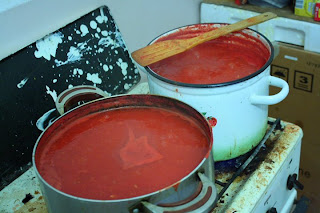 Know your proportions! 20 kilos is way too much for your first time. After about 8 hours cooking down the mixture, I was ready to can. Sterilize jars and lids. When ready, dip jar in boiling water to heat it up. Immediately fill with hot food after shaking out water. Top off with about a Tbsp of lemon juice for every liter. Finally, remove lid from boiling water, shake off water and cover jar. 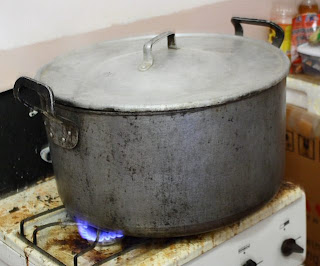 Last, place in giant pot of boiling water, so that it comes up to 3/4 the jar's height (in America, you can submerge if you have a waterproof seal in place before final sealing. For tomatoes, let sit about an hour in the boiling water, while fruit products take only about 10 minutes. Remove from water bath, and immediately seal. Flip upside down on the floor; in the morning jar should be cooled and if your seal is bad, leakage will have occurred. If everything is done right, the lid should be sucked in and the jar cool (not broken, obviously) and ready for storage. 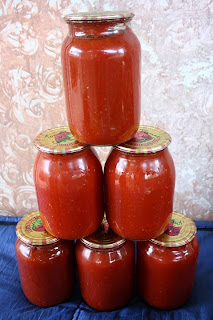 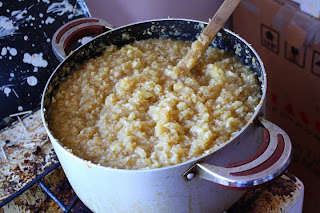 So, follow the recipe. We left the peel on and then food processed it. After letting it cook down, we pressed the mash into a sieve and removed the apple sauce. If you have access to a food mill or ricer, use it. This was a major pain in the but for such a large order (I mentioned I have a problem with proportions, right?). Add cinnamon, nutmeg, ground clove, ginger and nutmeg. 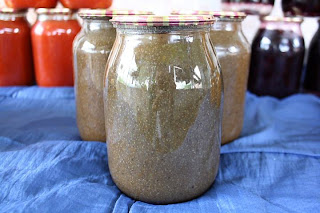 I have to admit, this was very satisfying. Unlike the jams that Armenians make, it has far less sugar and the apples (like everything but the peaches and the tomatoes) came from my garden. 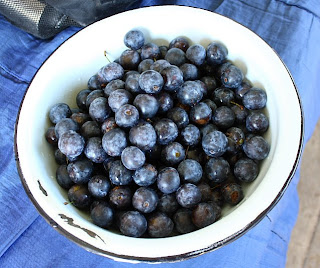 These are Damson plums as best as I can figure. They are small, and a bit unripe, which I wanted to make up for the uber-sweetness of the jam after adding a seeming excessive amount of sugar. 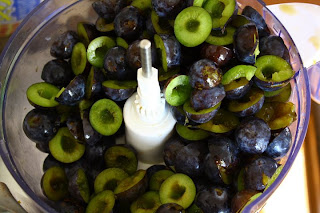 I marveled at the colors as I pitted the plums.; the brilliant green of the flesh, the indigo peel. 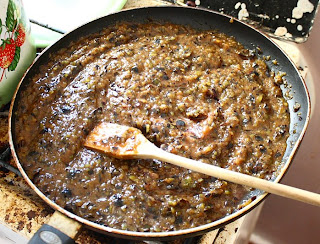 But after being run through the food processor, I had my doubts. I decided to leave the peels since I had been told by many commenters that the peel added a lot of nutrients and gave the jam a beautiful red-purple hue. At this point, with what looked to be fruit vomit (yeah, that's what I thought), I had the sincerest of doubts. 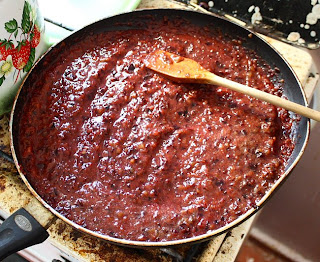 But, as it began to cook, a light pink started to break through the ugliness. 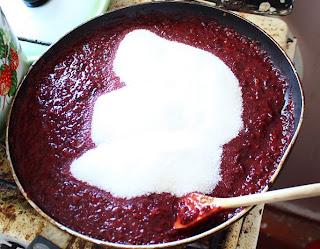 Which became a pristine magenta by the time the sugar was added. 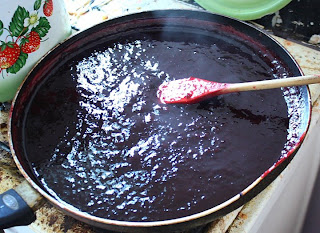 And after reduction, I had the most amazing looking purple jam I'd ever seen. Really, scroll up; remind yourself of the fruit vomit and then look at the final product. 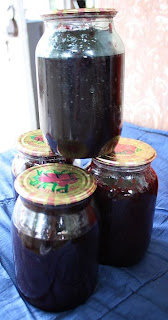 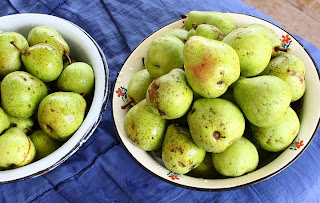 Trying to reign in my propensity to start with too much fruit, I handpicked pears from my yard. A bit unripe, but I wanted to try pear butter. 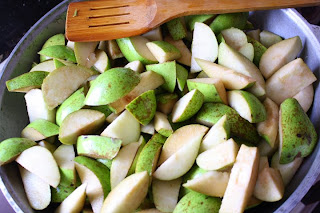 Gorgeous right? I, however, made a rookie mistake. Pears need to ripen indoors for 7 to 10 days, in a paper bag in a dark, cool place. First batch took 4 hours and I managed to get 2 cups of pear sauce. The second batch failed even worse; I scrapped it all at 2 am and went to bed. Angry. Very Angry. But I have another 7 kilos of pears from the tree sitting in my desk waiting for this weekend. 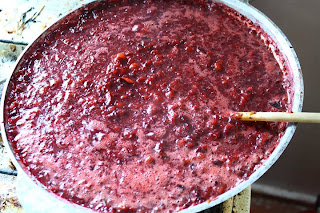 So, after the failure of the previous day, and being a little dejected by only having one liter of plum jam, the ladies returned and helped me make more. We did 3 jars, which goes by far faster with 2 extra folks helping pit, cut, stir, etc. Remember the portion control? This overfilled my largest sauce pan, and ran over. Good news, I know now that my largest pan can handle 3 Liters at the max. Best to stick with 2. 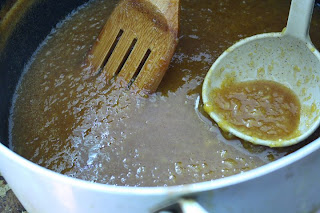 Peaches! Reduced to sauce, with cinnamon and sugar. I love the Smitten Kitchen blog, as you should, too. This recipe appeared on Day 5 of the week and I took it as a sign. I, however, couldn't not add cinnamon. I  added .5 Tbsp per Liter, and it smelled delicious. 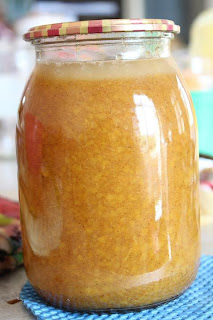 Remember, the lemon juice for preservation! Also, a word of advice: if you're using the old fashioned kind of jars and lids (Americans, this isn't you), having a small grip mat helps a lot when dealing with exceptionally hot jars. 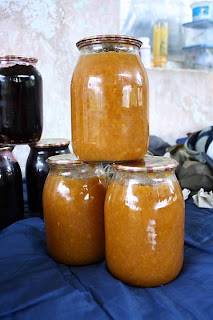 And not a drop to spare with the 3 jars filled.

Day 7a: Blackberry Jam
Well, I could buy blackberries or I could pick them. What do you think I did?

My host family invited Caroline and I to go picking with them. We didn't realize this would be a 7-hour event and when I returned later, 5 kilos of blackberries richer with bonus wild hazelnuts, I just gave up on trying to can that night, especially since another local volunteer brought down a kilo and half of blackberries for me.

Day 7b: Blackberry Jam, this time with cooking
6.5 Kilos of Blackberries - > 5.5 Liters of blackberry jam 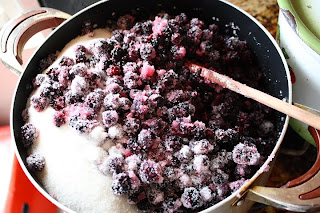 Simple: Wash, add sugar, reduce. At least this time, I remembered my proportion problem and did it in two batches. 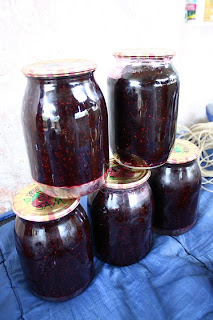 And the extra half liter has been tasty. 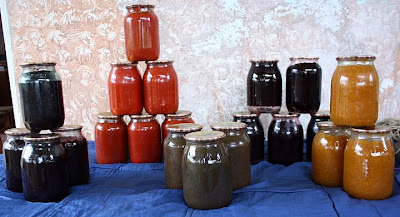 Bonus! After being bored after such a busy week of canning, I decided to pick Հոն (pronounced like the word "hone"; it's a cornelian cherry) from my trees. They are quite tart, and if you have never tried one, know that the cherry moniker is very misleading. Rough peel, extremely tart until over ripe, and even then, it's still sour. But I have 7 trees of them and it kind of makes me feel bad to see the fruit go to waste, so I looked up a recipe. 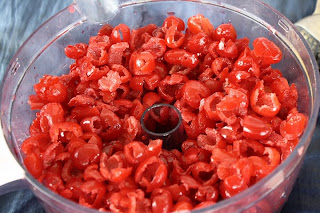 Pitting the small Հոն took forever, but you can see, they have a really rich color. 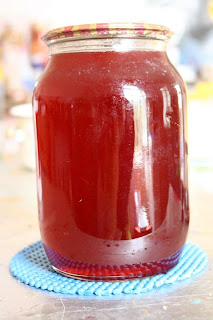 I added too much water, and it was obvious after pressing through the sieve. The marmalade is more a syrup right now. I have plans of reducing it more when I open it this winter. The taste is hard to describe. Considering this recipe required the greatest part sugar, there is a sweet taste. The tartness isn't as strong as I suspected; I'd recommend this for the adventurous or those who already have a taste for cornelian cherries. The color alone is striking, however.

And that concludes canning until I get these pears ripe and pumpkins come in season.
Posted by John Q. Doe at 2:52 AM 4 comments: